What stands out the most from our past six months on the road would definitely be the motorbike trip we did of the extreme north of Vietnam.

Tam Dao was extremely misty, creating a surreal, haunted atmosphere. Vietnamese people visit this hill station on weekends to escape the heat; we didn’t see any foreigners. They eat a lot of endangered/forbidden species up there, so it’s common to see turtle, porcupine, deer and squirrel on their menus. There is a bear sanctuary that is open once a week to the public, but you have to book ahead, so we didn’t go. There are no ATMs so make sure you have enough money if you’re planning a trip up there. 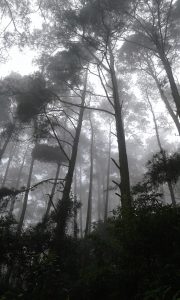 The ride up to Tam Dao Hill Station 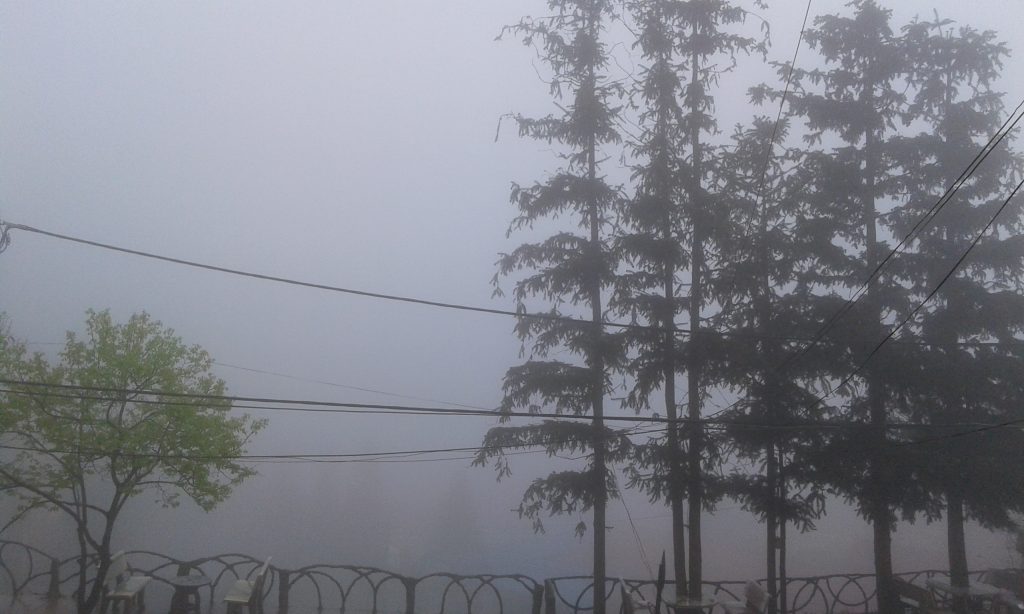 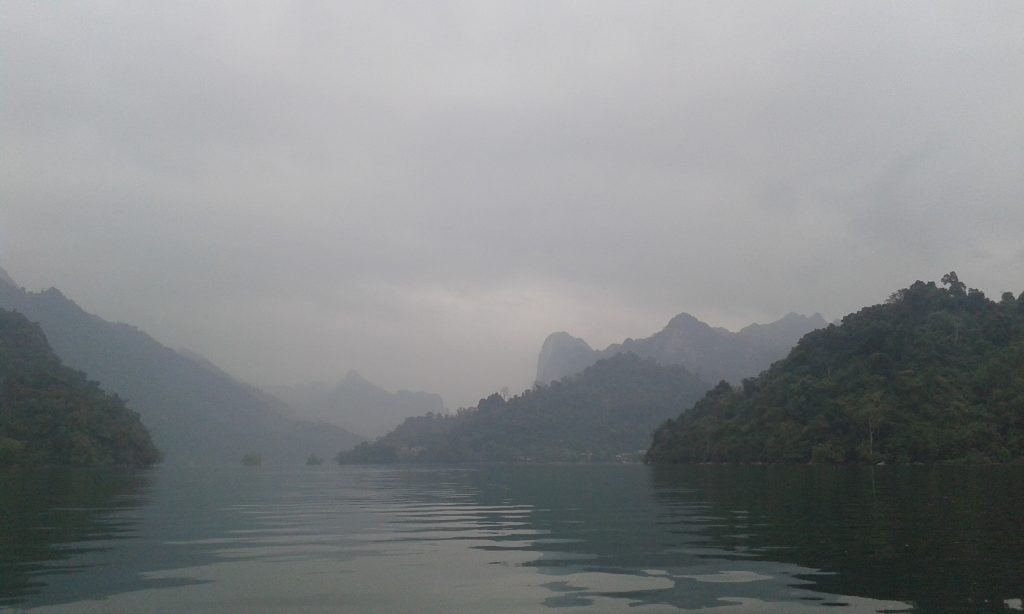 Ba Be was an extremely relaxing place to stay. There is an abundance of Tay homestays and not so many tourists. There’s no much to do here except chill out, enjoy the views, and go for walks. Food options are very limited – homestays make you breakfast and dinner (and lunch if you request it). The two main villages to stay in are Bo Lu and Pac Ngoi. We made the mistake of staying at Mr Linh’s for one night, because some travel bloggers who did the extreme north loop recommended it. We regretted staying there not only because it seems most tourists just stay there and all other places are near empty, but because the food is just average and the room prices are overpriced. We stayed in a dorm there which was around 110k per person. Other homestays charge around 150k for a small double room. The second day we moved to a different homestay, where we were the only guests during the few days we were there. Food was excellent and plentiful (too much in fact – we saved the leftovers for lunch). 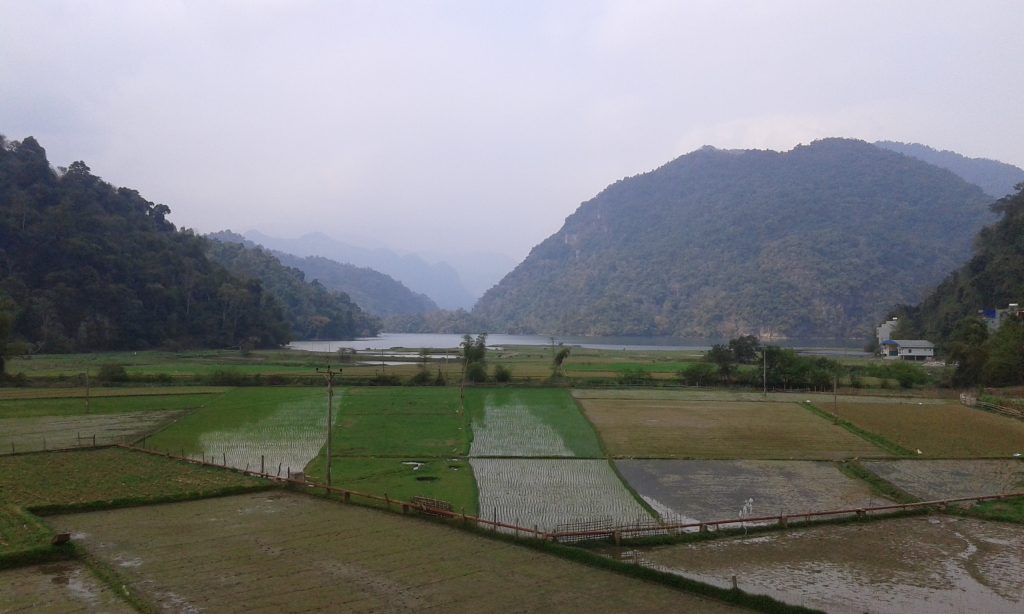 View from our homestay

Surprisingly pleasant town. We didn’t do much here as it was raining. The main attraction in the region is the Ban Gioc waterfall, but as it is still a few hours drive, we opted to skip it. We tried the margarita pizza at Pizza Chi, the much hyped about pizza place. It was actually extremely good.

The ride from Cao Bang to Bao Lac

You can take two routes from Cao Bang to Bao Lac. From all the travel blogs I’ve seen so far, everyone doing this trip takes QL34. We took TL204 because we followed Google maps on my phone. Getting onto this route involved a small turn off and across a tiny bridge; we thought we had gone the wrong way. The road was a terrible dirt road full of small rocks. We didn’t know whether the whole road to Bao Lac would be like that and couldn’t decide whether to keep going or turn back and get onto road 34. Eventually we asked the local villagers and they told us that after 4km the road would be good. Well, the road wasn’t complete. It would alternate from a few hundred metres to new, flat road to stones and dirt. 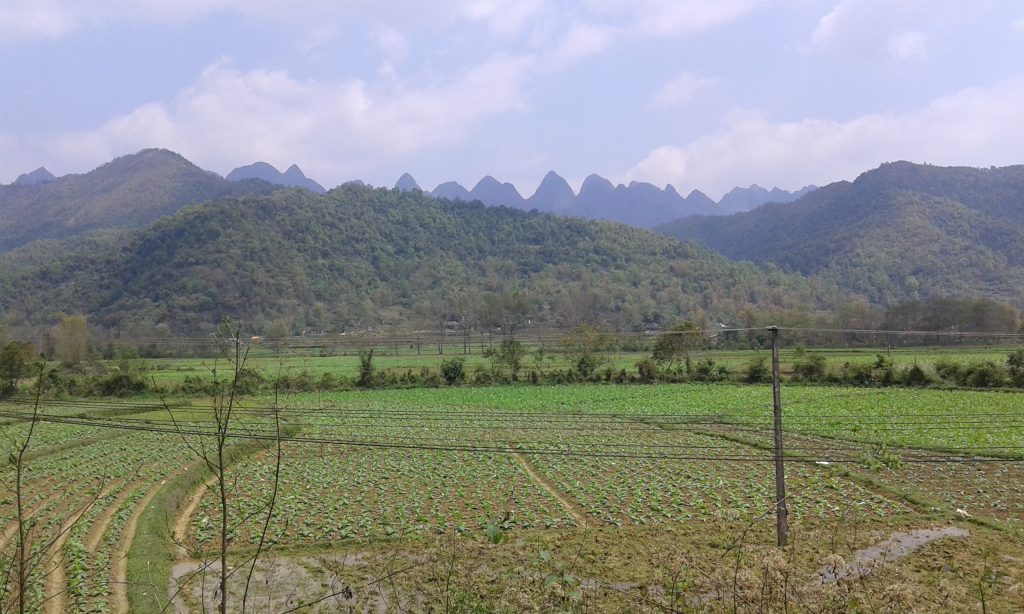 On the road to Bao Lac

Unluckily, the chain came off our bike while going up a mountain. A local helped us to temporarily fix it and I rode on his motorbike since he was going the same way as us. This was the most beautiful part of the leg and maybe even the whole trip and I didn’t get photos because I was terrified on the back of some stranger’s bike while he sped up and down the mountain. I can’t even begin to describe the views – spectacular red coloured mountains and valleys. If someone takes this road, please take photos and send them to me.

After about 30km traveling with this man, we got Tuk Tuk fixed and I got back on. The guy told me the road afterwards would be easy, but he was wrong. We had to go round another mountain, the road was steep and narrow. I don’t know if we would have made it if we would have had to go the other way around – from Bao Lac to Cao Bang.

I definitely recommend taking the TL203 road instead of the usual 34 if you have a reliable bike and are a confident and capable rider. The road is around 120km and should take you a good full day of riding. Seven or so hours. You can see more photos of this leg here.

The killer leg of the trip but also the most unforgettable. Only 70km but it took us over seven hours. Like the previous leg, there are two routes you can take. Everyone seems to take the QL4C road and not the TL217. Now I know why. We decided to take TL217 which lies close to the border of China. Words cannot accurately describe the intensity and exhilaration of this road. There were times when I wanted to cry, like approaching a river and seeing no bridge. Going back was no option – the road was already so tough and at times I had gotten off the bike and insisted on walking. 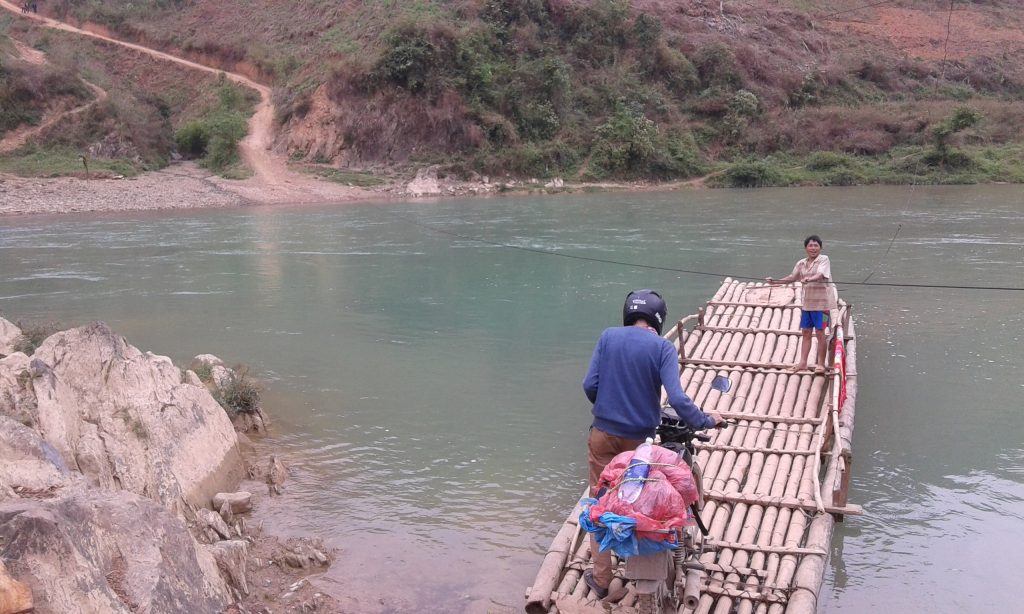 As you can see in the photo, we took a bamboo boat across to the other side, where we had to face an enormously steep path. I didn’t know how our bike would make it. At first attempt, it didn’t. We crashed the bike and fell. We then attempted to push the bike up the hill. No success. The man who took us over on the boat then rode it up the steepest part for us. We thanked him and went on our way. Still in no means easy. More metres of me just walking. At one stage, when I was back on the bike, I had to turn my head to the right to avoid looking at the terrifying drop to the left. The road was perhaps only a metre wide. I was thinking about how I would throw all my weight to right and make it crash if the bike were to lose control and head towards the cliff. I still don’t know why I didn’t just walk that whole way.

Even though I alternated between wanting to cry and thinking about why the hell I had left Berlin, I am still glad I went through that hell of a trip as the scenery was breathtaking. I wouldn’t recommend attempting to do this route unless you are a really strong driver. We hardly saw anyone riding on this route during the whole 7+ hours, only seeing locals while we passed through villages. (We even got invited in for tea with a Hmong family.) Here is the photo journey of this emotional ride. 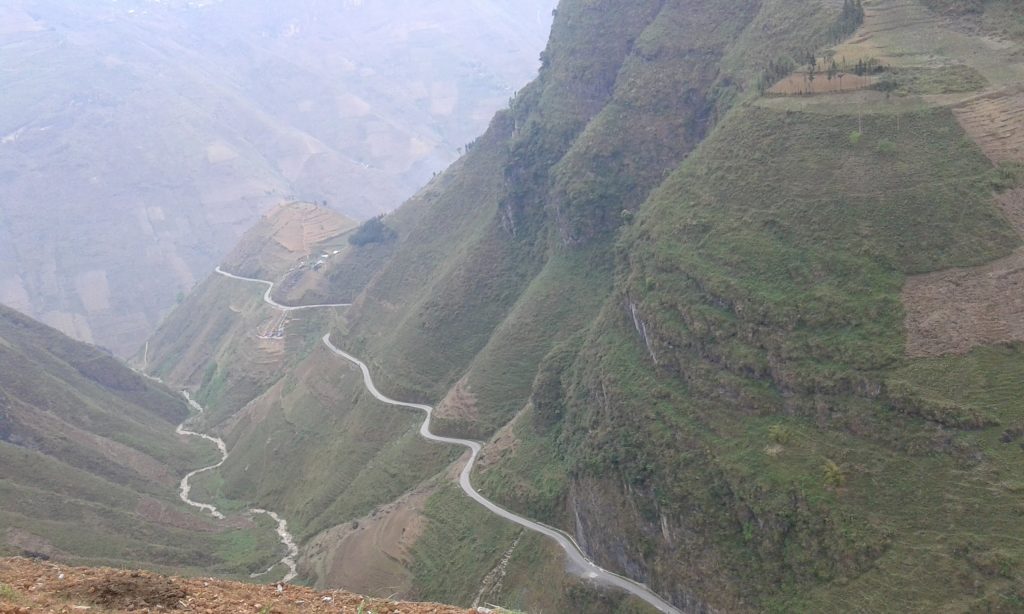 The road everyone claims to be the most spectacular in South East Asia. I’d say this road and the one that I didn’t get photos of would be on par. Very easy paved road compared to what we had been through the two previous days. More photos here. 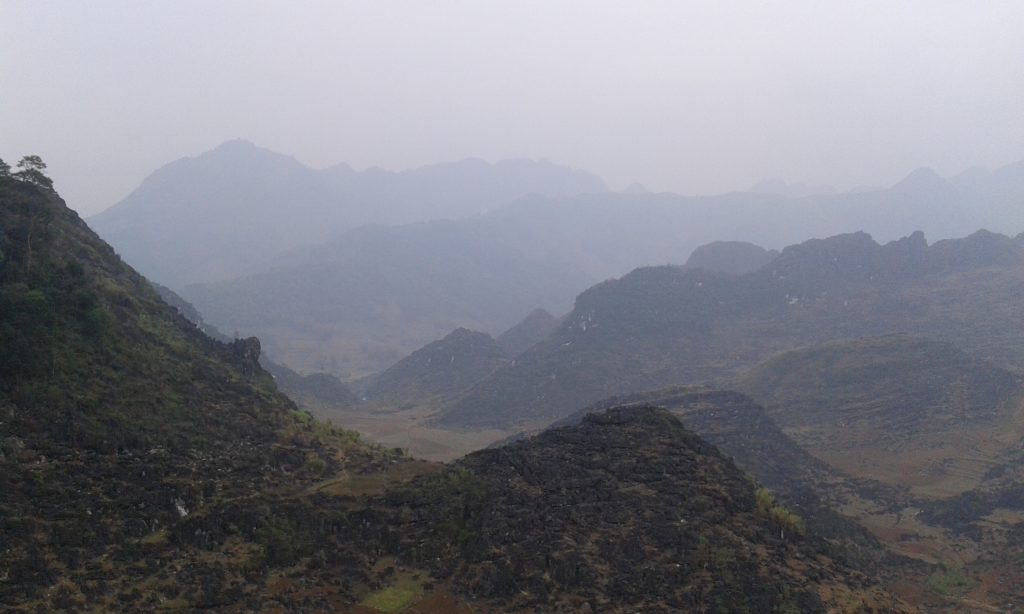 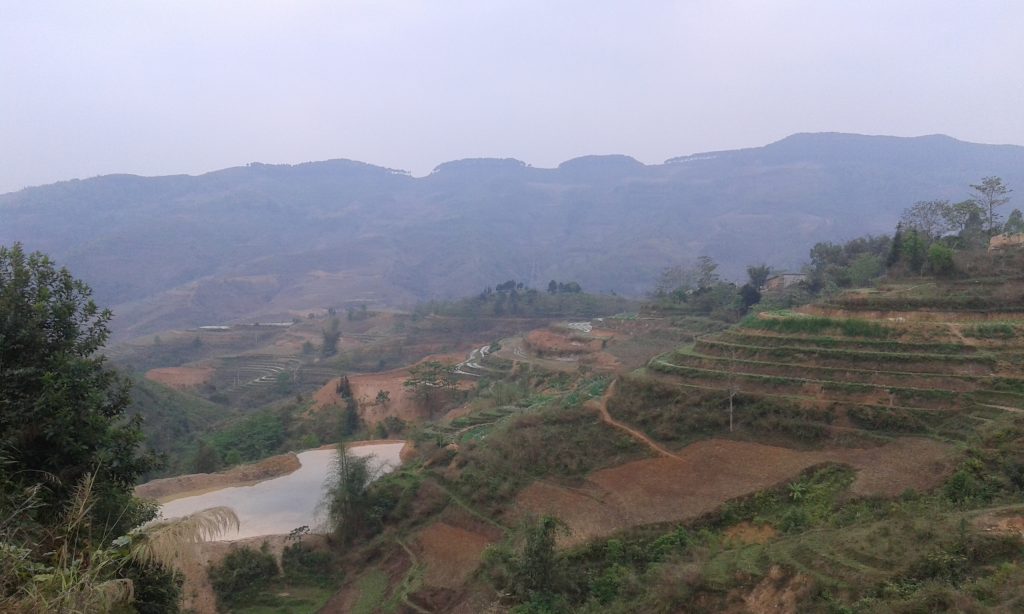 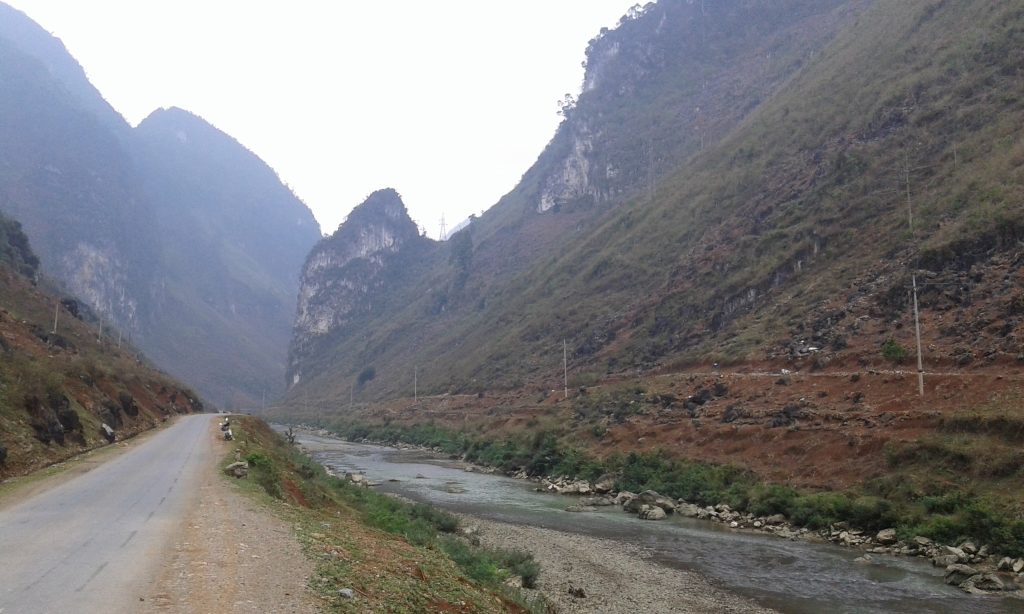 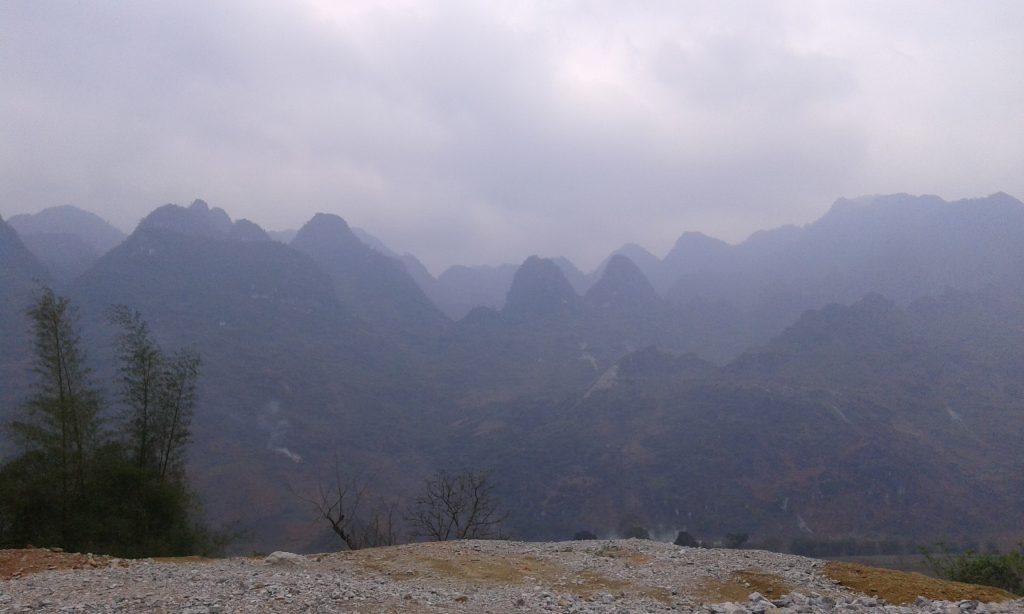 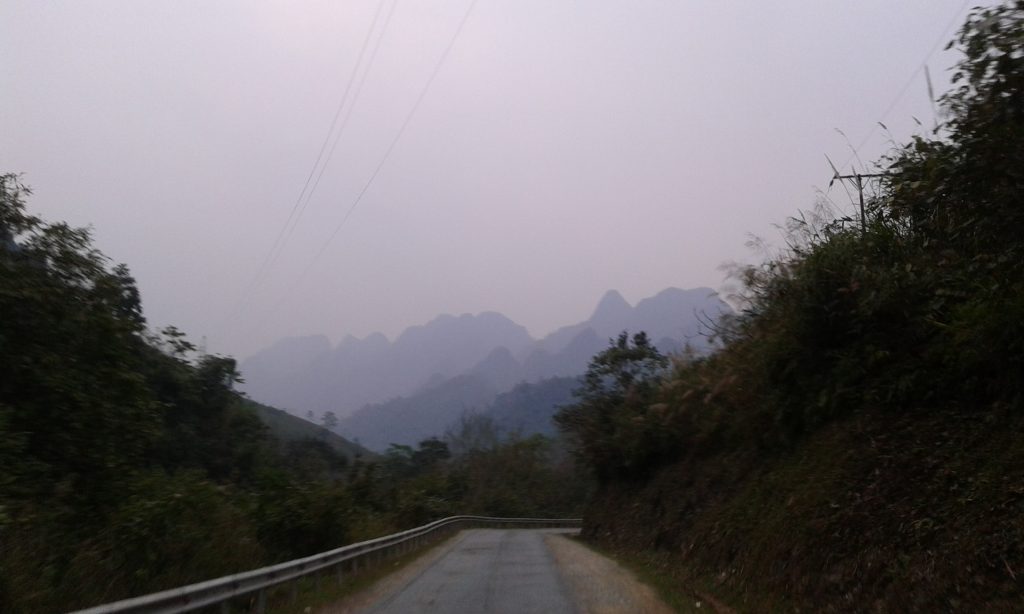 The road from Dong Van to Ha Giang is also meant to be extremely beautiful. Unfortunately for us, it was super misty so we didn’t see much and the wind was bitingly chilly, so we didn’t stop much for photos and just sped to our destination.

While Ha Giang is actually quite a nice city, we chose to spend the last few days of this motorbike trip in Thon Tha, a Tay village just 6km away from Ha Giang. There are three homestays to choose from – we stayed with the Cay family. I am not a fan of rice wine, but on one of our nights there, I participated in the nightly excessive shot taking. While I went to bed feeling ok, I woke up in the middle of the night feeling so sick, I had to throw up. So now I definitely don’t like rice wine. Most people seem to love it though because it doesn’t give you a hangover. 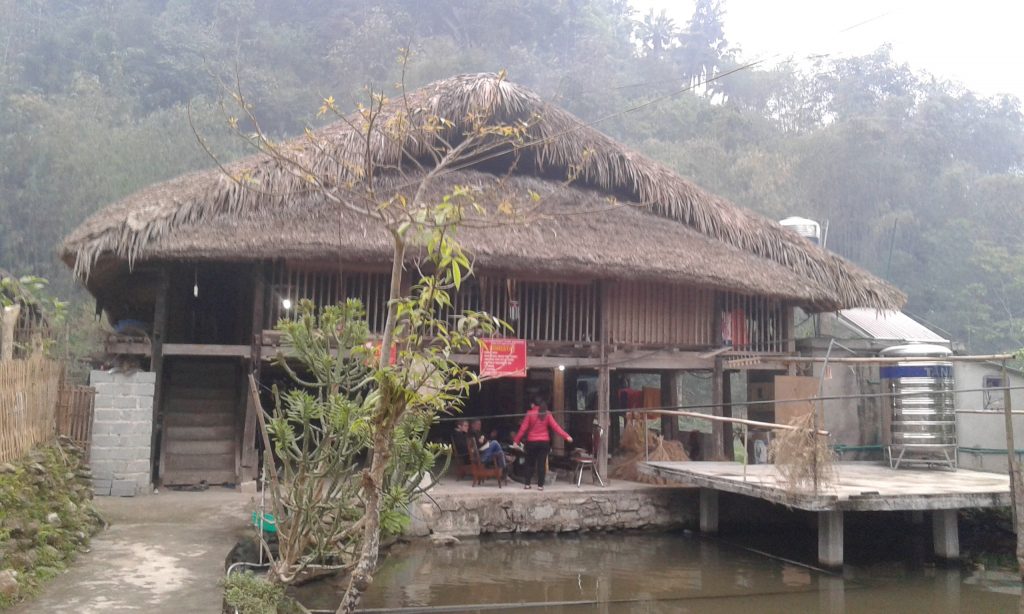 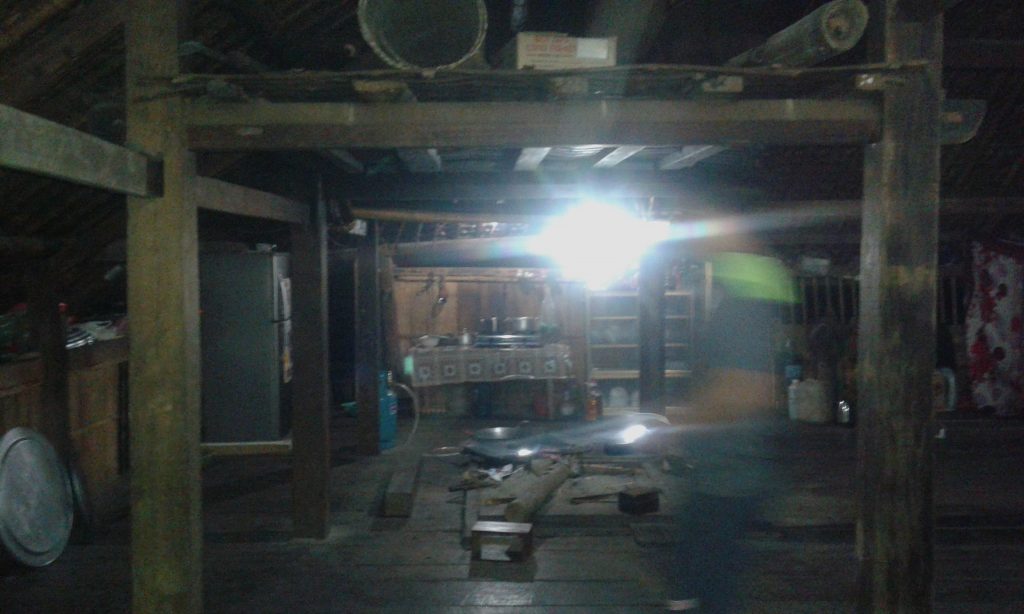 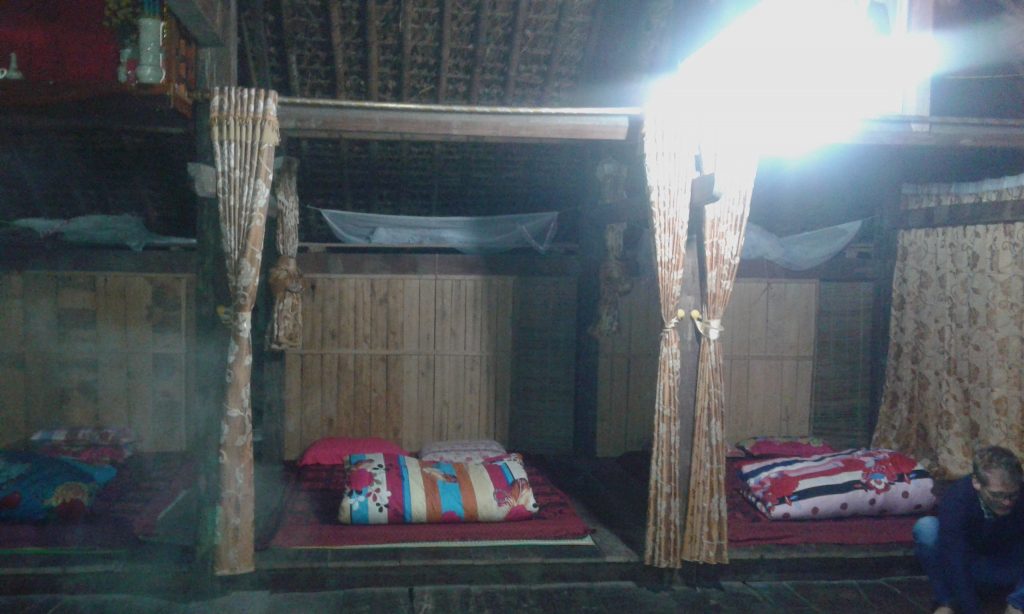 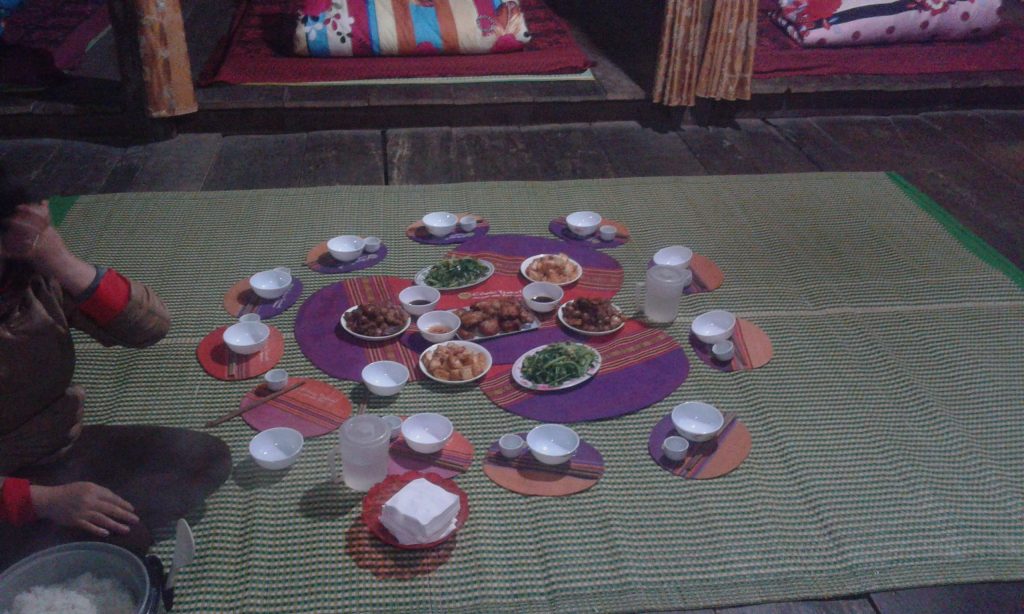 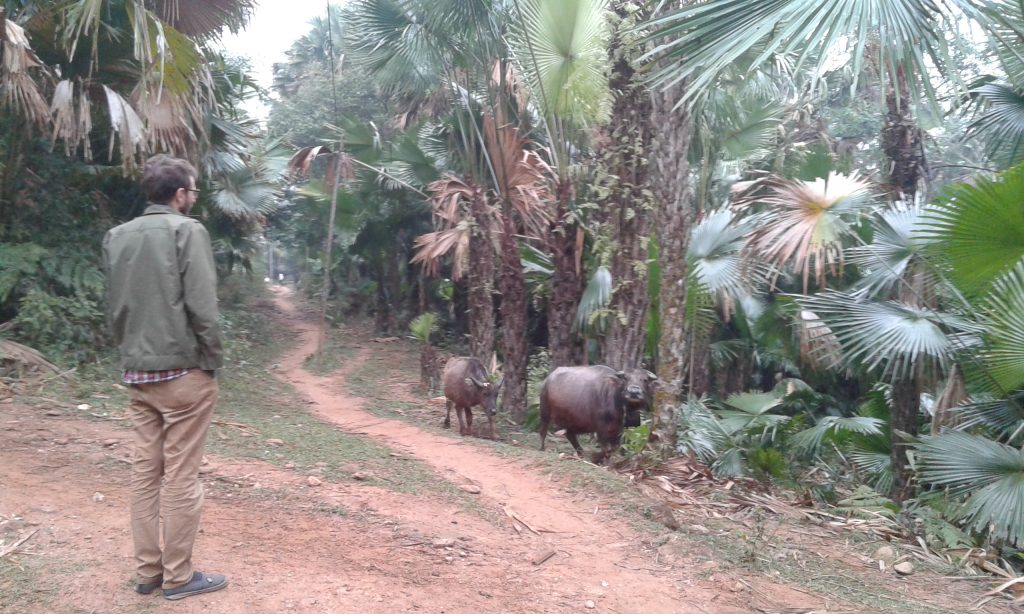 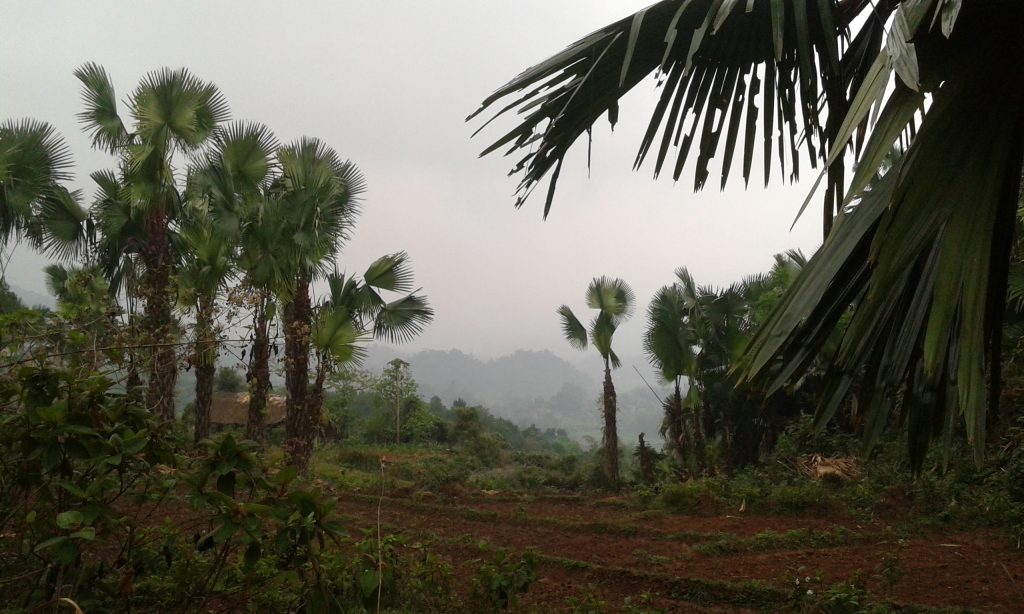 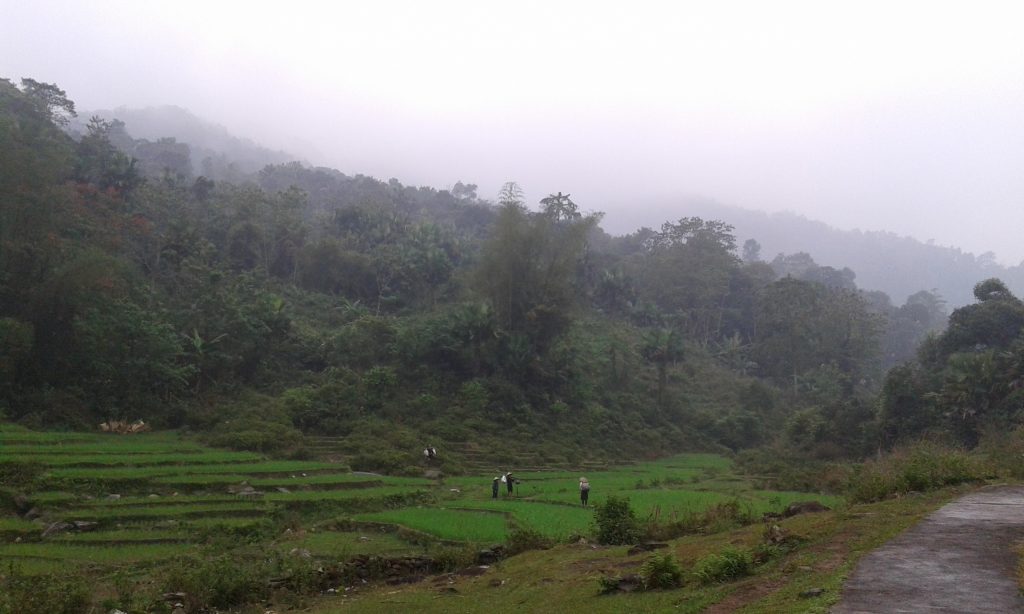 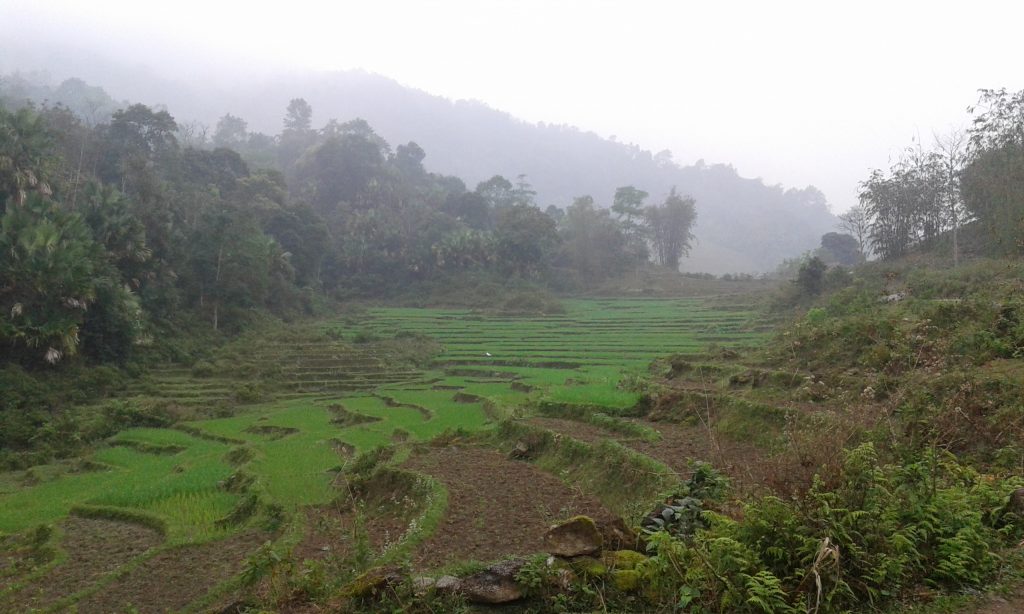 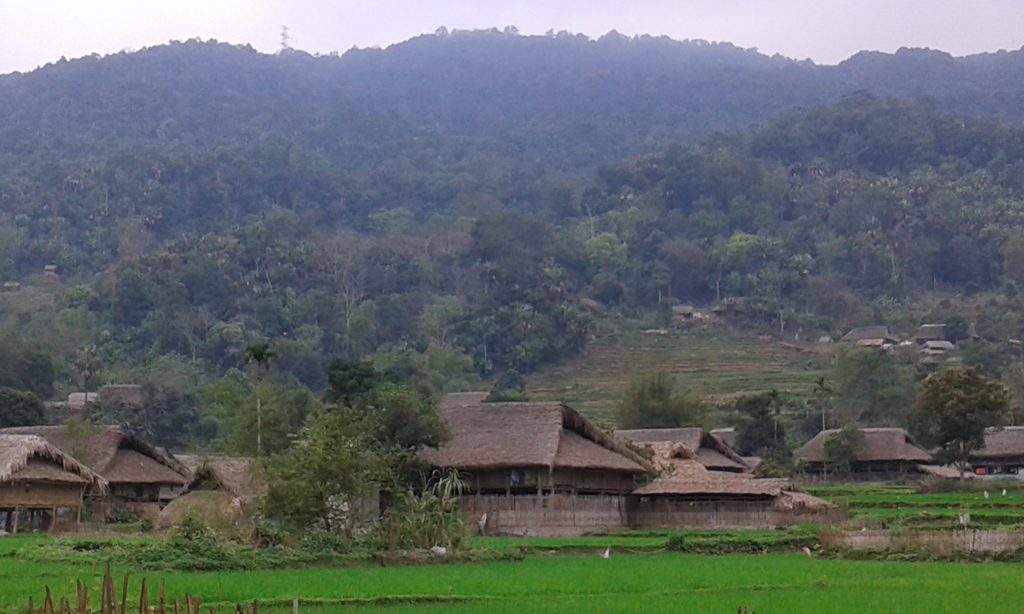