This was the first weekend Artur and I spent at Fröhden without any visitors or guests. We worked pretty much the whole time, from Friday afternoon to Sunday dusk. By the end, I was pretty exhausted and was happy to return to Berlin to do nothing. Though I did discover the best way to unwind after a long day of physical work: a glass of wine and a book in a hot bath.

We did no gardening work on Saturday as we woke up to snow. 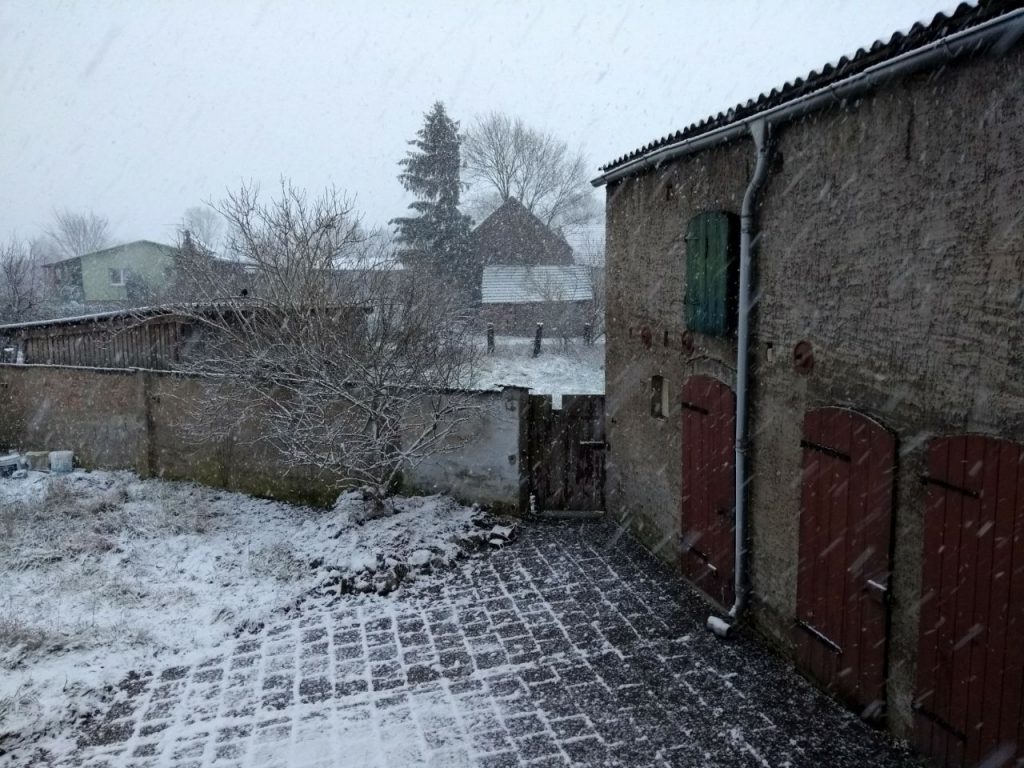 Once again, I underestimated the amount of time it takes to paint a room. I thought we would get a few rooms painted but we only managed the kitchen and the dining room, and both still need more work.

We prioritised the kitchen because we really hated it. Here are some photos of it when we first got the keys to the house: 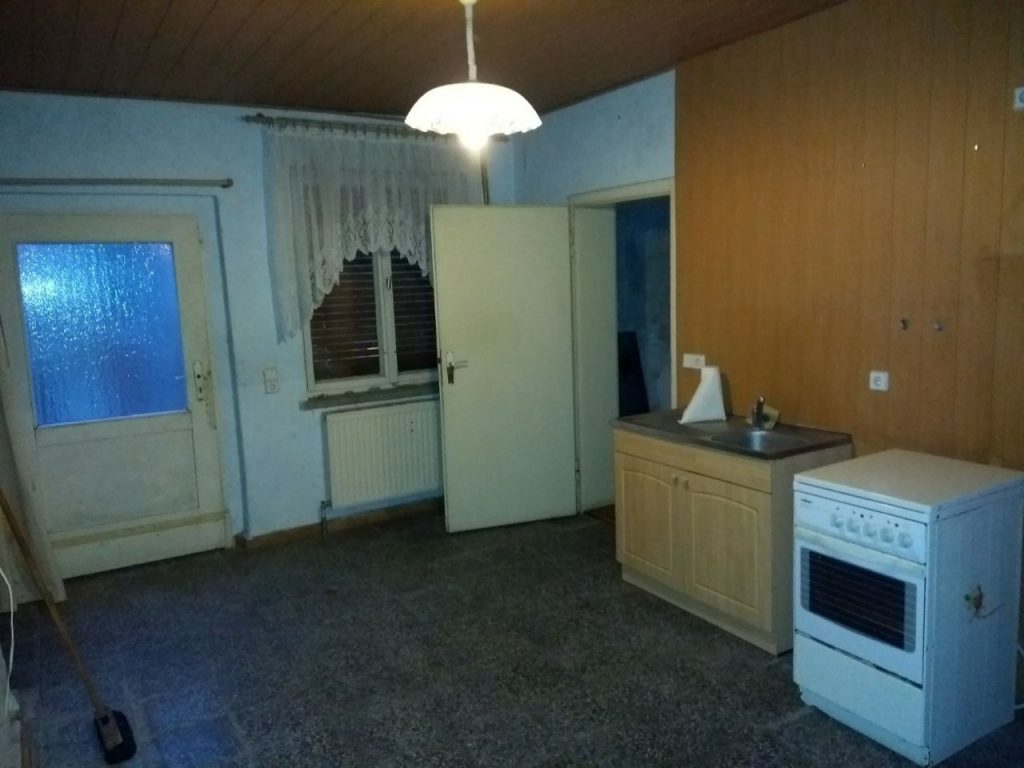 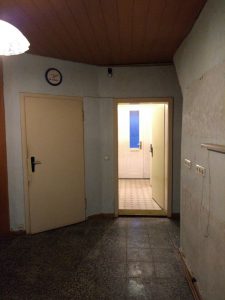 I worked for a few hours on Friday night, as well as 12-9pm straight on Saturday to achieve the following: 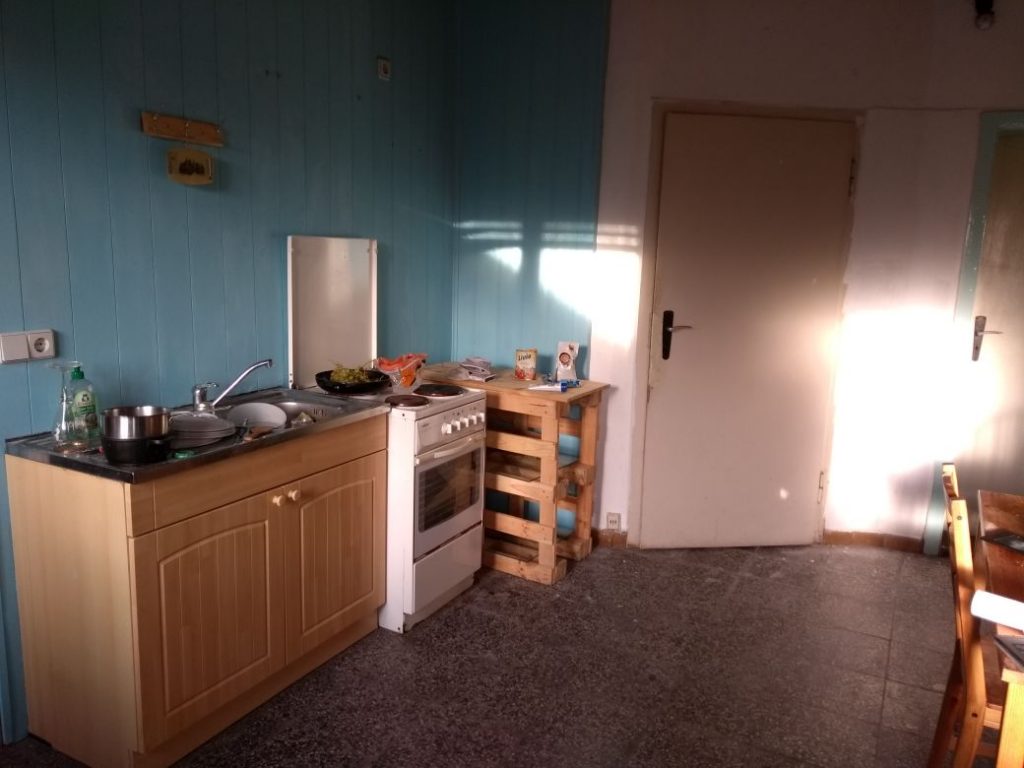 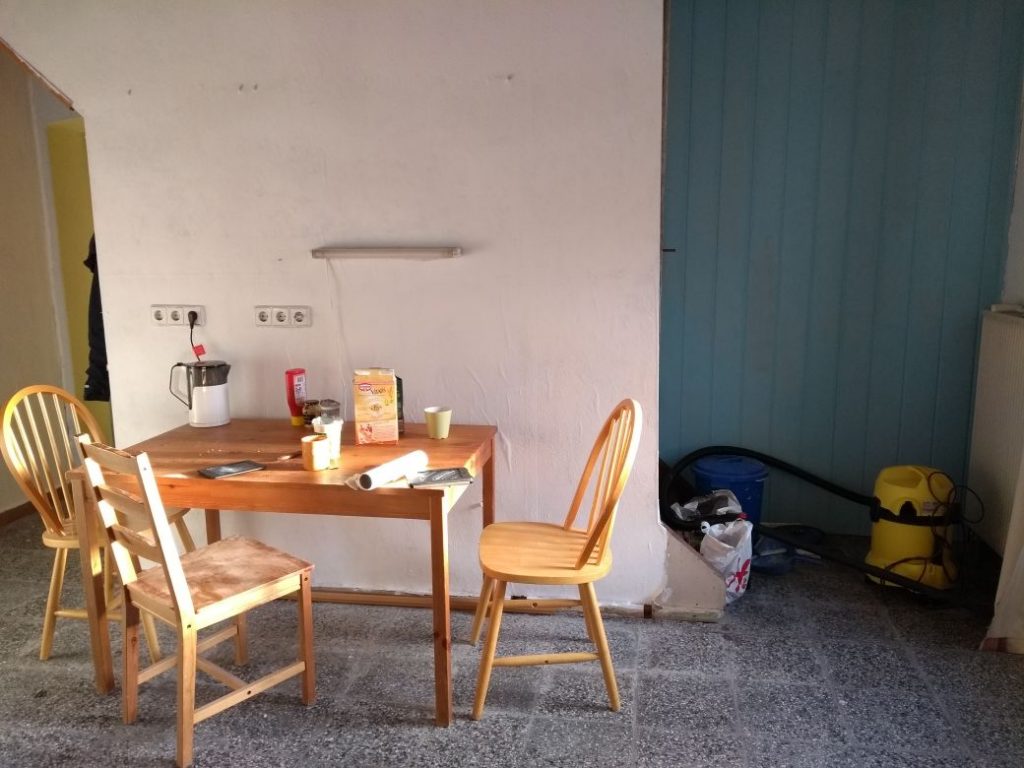 I originally wanted the blue to be a very deep, royal blue, however I didn’t buy enough colourant so it ended up being this sky blue. We decided to keep the colour as it is – it reminds me a bit now of a beach house. Painting the white also took forever because the walls were different everywhere – some parts we decided to paint directly over the wallpaper, some places we pulled off the wall paper and had a crumbly wall, other parts under the wallpaper were quite shiny from other paint. 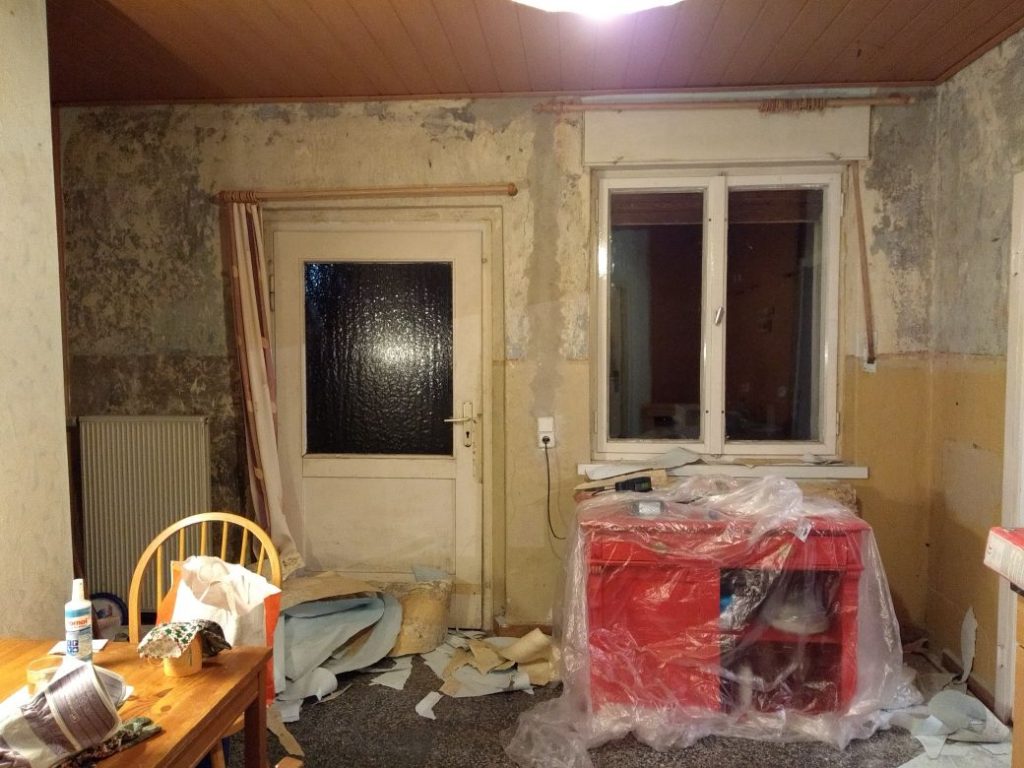 Originally I had thought we would paint the entire kitchen grey, which is why I had painted one of the doorways mint, so maybe I will repaint this doorway another time. We were also thinking of painting the ceiling. It is this same weird ‘fake wood’ plastic material which we painted blue; I am not sure if a blue ceiling would look weird or not. Otherwise I guess it would have to be white. Painting over this material is definitely better than keeping it as it is, because the paint hides the plasticity and makes it look like wood.

Something needs to be done about the floor. Apart from perhaps a rug, we still do not know how to approach this. The kitchen is quite a busy pass through room as it has an entrance to the garden, so it will be stomped through with potentially muddy shoes.

Artur spent a lot of time filling cracks in the walls with plaster. Particularly time consuming was the ceiling of the living room. Not only did he spend hours plastering the ceiling, he also painted it and two of the walls. 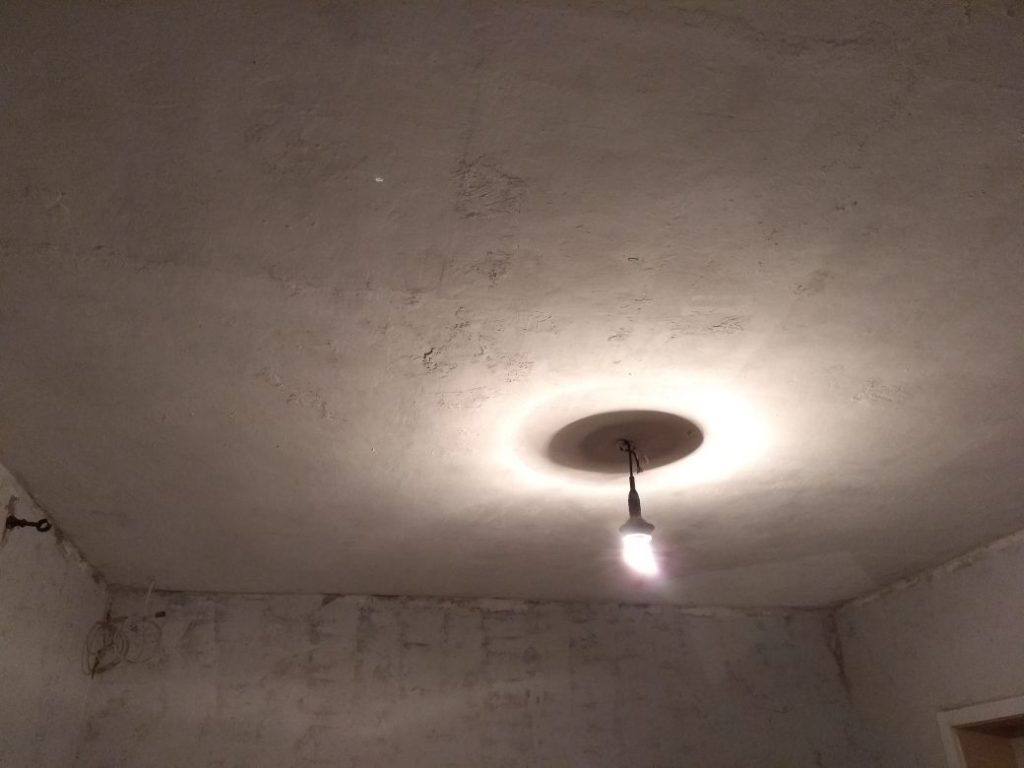 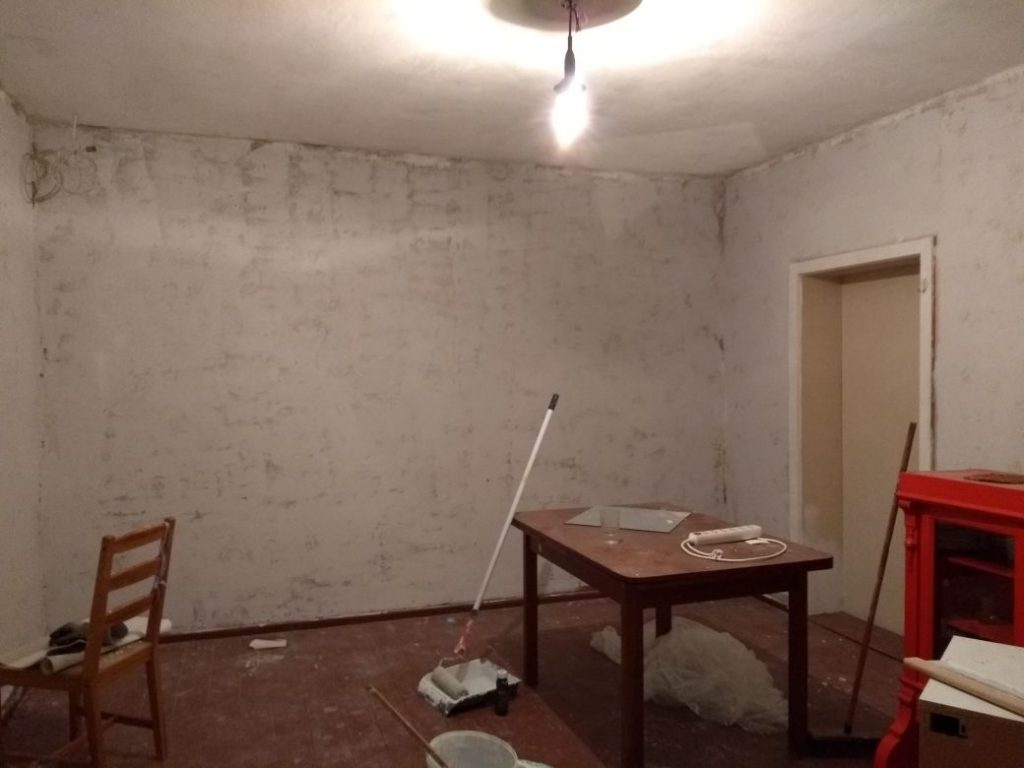 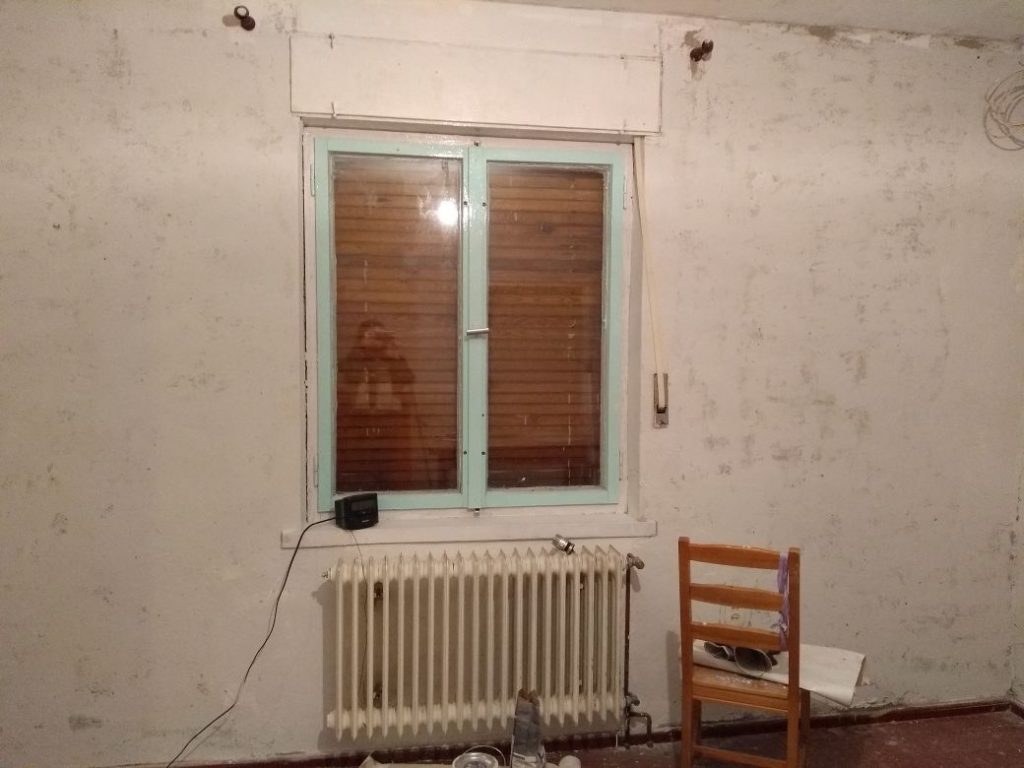 On Sunday the sun had melted away the snow and we were able to work on our greenhouse. It took a good few hours and the wind was piercing, luckily we could partly shelter away in the shed to construct it. 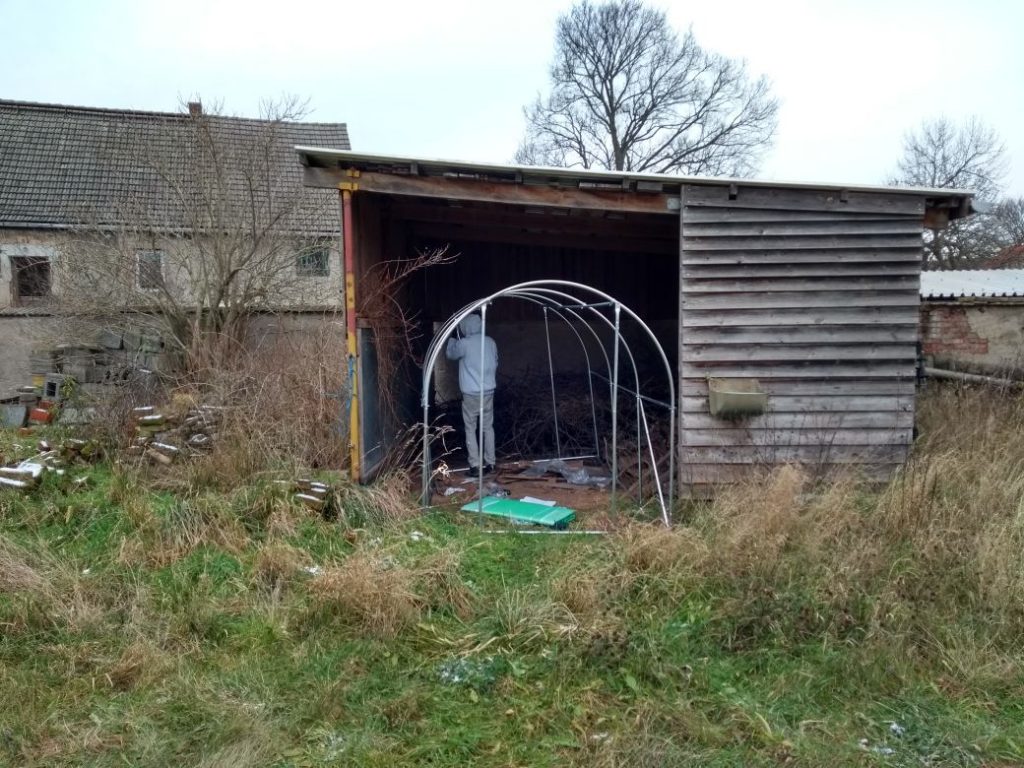 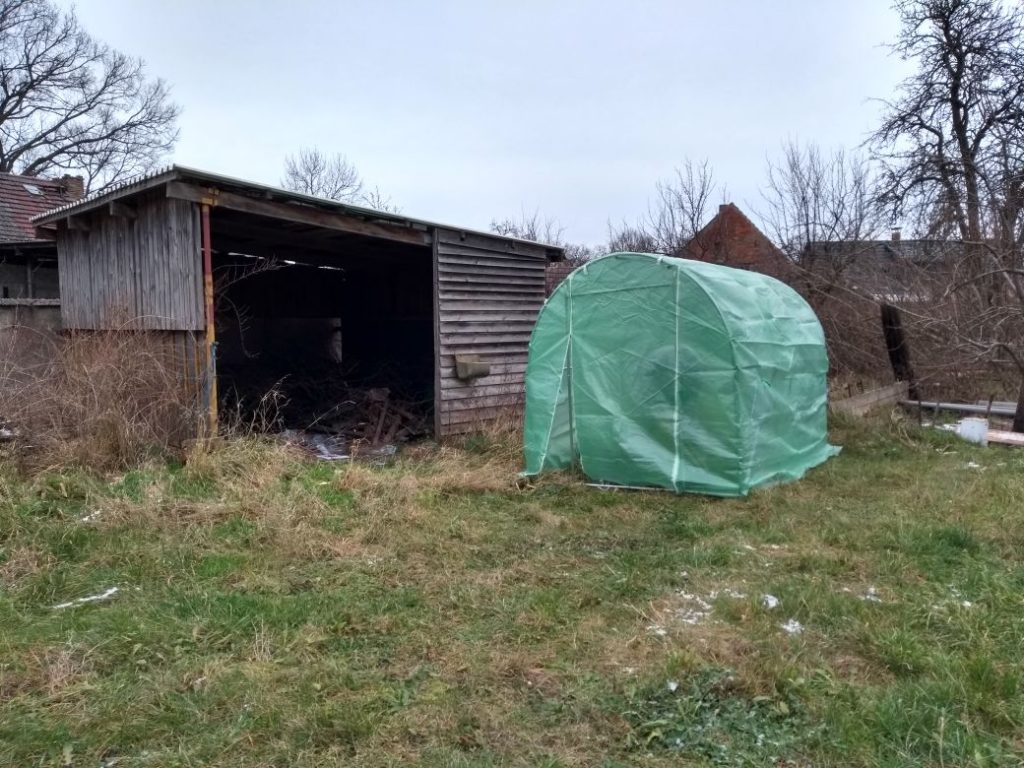 Artur dug ditches to ‘plant’ the greenhouse into the ground and we covered the bed of weeds with cardboard and strips of old wallpaper.