I never had a pet growing up. Unless you count a couple of goldfish that died because my uncle overfed them while we were away on holidays.

I never considered myself an animal person. To be honest, I never really had much contact with animals, apart from the odd friend’s pet here and there. It wasn’t until our Asia trip, where I was constantly exposed to animals, whether it be a cow, cat or duck, that I realised that animals are my friends and that I would have to give up eating meat.

I used to think chickens were creepy. Even when Artur first brought up the idea of keeping chickens, I wasn’t entirely sure. Now I will proudly admit to being a chicken mother. There’s something fascinating about them, and I could watch them for hours. The way they behave and interact with one another and with humans. They definitely have their own distinct personalities. Who knew you could get attached to chickens? I cried for two days when Pumpkin died.

Then there’s our cat, Kitty. We’ve had her for over a year now, and I can see how my feelings and attachment have developed. I told Artur that I see why old single women keep cats, and he asked me whether I think it was the cat or the singledom that came first. I can easily spend a lot of time just cuddling Kitty in bed.

Sometimes I wonder if my love for our cat and our chickens has developed because I am getting older and it is my maternal side coming out. As I approach the age of thirty, I wonder if my animals are a replacement for a baby. But no, I am certain I do not want to have a kid in the next few years. I like my life the way it is and can’t imagine changing it completely for the added responsibility of having a child. At times I even wonder if we maybe have too many animals. We have the responsibility of making sure they are cared for, even when we are not there. The decision to go to Asia and stay for a year would be harder to make now than before.

Most people know that I would love to have a donkey. Now is not the time, but one day, when I am sure I want to be settled in one place, I will open my donkey walking business and I will become that weird animal lady. 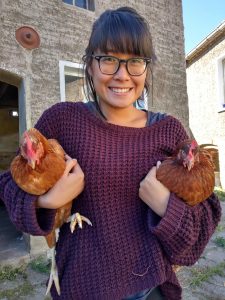