About a month ago, I read Jonathan Safran Foer’s book ‘Eating Animals’. Since then, I haven’t eaten meat. (Yes, I realise one month isn’t a long time.) Sri Lanka and Indonesia are both fine if you want to avoid eating meat. Northern Vietnam is another story though.

So many times I wished that Artur would just eat the god damn meat while we were in small towns in North Vietnam. I’d be hungry yet we would go from place by place, where I’d ask them if they had vegetarian food, only for them to laugh and say ‘sorry, no vegetarian food in this town’. He would normally have to just settle for pho with nothing – just the noodles. If he was lucky, some places would have egg and crack one for him.

I was never a huge meat eater, especially in Berlin. I would only eat meat a couple times of a month. In April this year, while we were in Hoi An, I decided to experiment with (pesco) vegetarianism. About a month after eating no meat at all (though I did eat fish and prawns), I started getting a weird feeling in my legs, like they were going to fall off. This started happening during the night while I was lying in bed and made falling asleep very difficult. Eventually it got pretty bad and I had this weird feeling during the day as well. We began to suspect it was from the lack of meat eating. I ate some meat and the feeling went away. After some googling, I realised what I had was ‘restless leg syndrome’. I tried again to restrict my meat intake and found that after about a week of no meat, my bloody restless legs would come back. So then that’s how I began eating meat just once a week.

In Indonesia I started eating fish more regularly. This I found removed my need for my weekly meat intake. A couple of times at night I would feel a mild version of restless legs, but this was cured by eating fish the next day. So this is the start of my no meat life. Let’s see how long it lasts. Though this book really did give me a good kick. We fly back to Vietnam at the end of next week. I will no longer scream in my head at Artur while we search high and low for vegetarian food in Vietnam. 😉 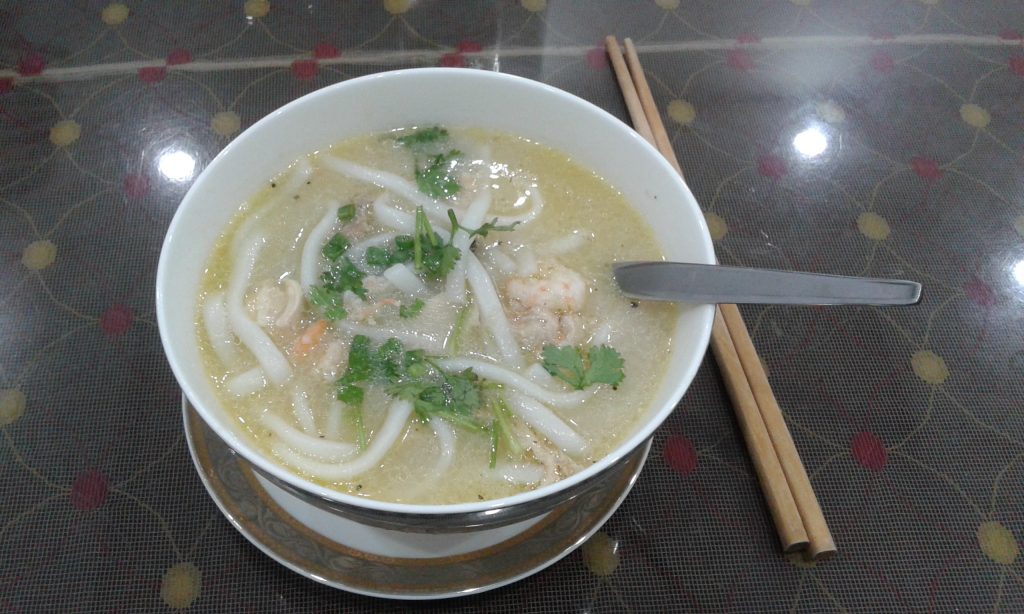 My favourite Vietnamese dish – bánh canh tôm nuóc dùa (a Mekong specialty) – noodles with prawns and coconut milk, made by my lovely grandma