Don’t do it. The owner is untrustworthy and just isn’t nice.

We unfortunately stayed and booked with Restu by View because it was recommended to us by the owner of Asoka Homestay in Senggigi (who is really nice and friendly). I was tempted to book the Rinjani trek through him while we were staying at Asoka, however, I still wasn’t sure if I wanted to do the trek and I heard that it was best to book directly with the tour companies rather than dealing with a third party. (As sometimes you will be promised things as part of your package but not get them.)

So we arrived to Senaru by motorbike and spotted Restu. We liked Asoka’s owner, so we thought, why not, let’s just check it out and if it’s ok we’ll stay here. It was decent. (Though could have been cleaner, but hey, it’s Asia.) The best thing about it was the view – which all the guesthouses on that side of the road have anyway. The restaurant is expensive and mediocre. 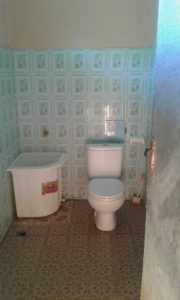 Restu’s owner then explained the Rinjani tour options with us, and we said we’d think about it. But he came back with a receipt book and started writing us a receipt. I didn’t like it, since we never actually agreed to booking a tour with him, but as we were tired, we just went with it.

The quality of the trek was fine I guess, (you get what you pay for – in our case, 1.5 mil IDR each) though breakfast the first day was just a measly banana pancake. Perhaps though it was a good thing we didn’t eat much, as we had to sit in the back of a pickup truck for an hour to get to our starting point in Sembalun, which made us all feel a bit uneasy in the stomach. There were eleven of us in our trekking group – perhaps too many people for one guide. We had all paid for a three day, two night trek, however on the second day, six of us decided to end the trek early and get down from the mountain. We all had a bit of trouble with the owner in getting accommodation for the night/ transfers to our next destination but eventually it was all sorted. Or so I thought.

The owner told me to get up at 6.30am the next day for breakfast to be taken at 7am to Bangsal, where I would catch a boat to Gili T. He told me I wouldn’t have to pay for this as transfers are meant to be included in the tour package. At 7am, I was still waiting around in the restaurant area. The owner then told me to wait a bit because he needed to sort out his trekkers. Eventually after his trekkers had left to start their climb, he told me that I had to wait till 1pm for his clients to get back down from the mountain to get transferred to Bangsal. He told me that normally they pick up clients from Bangsal in the morning, but because today he didn’t have any, I couldn’t go. I told him that he could’ve told me this yesterday. He would’ve known the night before and even that morning that he didn’t have anyone to pick up yet he still told me to get ready for a 7am trip to Bangsal.

Well, he didn’t care at all that he had lied to me. Only when I asked about paying for a driver was he willing to arrange transport for me. I tried to negotiate but had to pay 200k to get from Senaru to Bangsal. No way was I going to wait till 1pm for his clients to get down from the mountain. They would probably take a few more hours then that anyway and I didn’t trust that I would still be taken then.

So the point of this post is to say – DON’T BOOK WITH RESTU BY VIEW! The owner isn’t friendly, doesn’t care about you, will lie to you and just wants your money.